The Work of Sue Hardy-Dawson 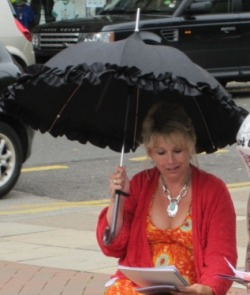 Sue Hardy-Dawson is a published children’s Poet with several poems in current anthologies by Macmillan, A & C Black and Oxford University, and regularly contributes to new publications.

She has also worked on many community art projects both voluntarily and professionally. Most recently with the ‘In The Land of Illustrations’ project a collaboration between the ‘Quentin Blake Gallery’ and the Prince of Wales ‘Arts for Kids Foundation’

A selection of  some of Sue's work is shown below, or you can go directly to her web site. 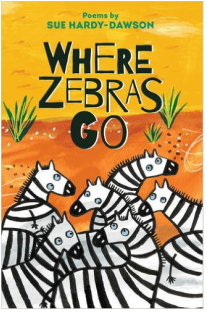 ​Sue has just had a collection of her poems published by Otter-Barry Books. This is currently available to preorder from Amazon .

Helping Mummy to Get Better 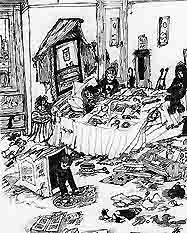 We’re helping Mummy to get better,
She has a flu and is in bed,
We weren’t really sure if she was sleeping,
So we lifted up her eyelids and her head.

We’re helping Mummy to get better,
She has a head hurt and feels sick,
We gave her the dinner that we made her,
But she went to the toilet really quick.

We’re helping Mummy to get better,
We wrapped a bandage round her foot,
We brought her a flannel just to wipe her,
Then we sang to her and read her all our books.

Mummy says she really feels much better,
She feels so well that we can go to bed,
Of course we know she’s just being brave,
So we’ll stay and make her better instead.
If You Could Taste Music
​
​If you could taste music
what flavour would it be?
Might whispers of waves
be salty or sweet?
Would a crash or a bang
be sharp as a lemon?
What if the tang of birdsong
lingered on the tongue?

If you could smell a rainbow
would its odour be faint
might the stars aroma
fill the sky with scent?
Could the tick of a clock
be the sniff of a sock?
What if some words went off?
Or smelt of wet dog?

If you could touch a dream
how would that feel?
Could wishes be warm
despair cold as steel?
Should shouting be lumpy
and questions be bumpy?
What if ideas felt watery
and lies all crumbly?

And if you could see time
how would that look?
A minute might be pale
some days quite black.
Does hope appear briefly?
What colour is poetry?
what if thoughts could be seen?
Well that might be
tricky.